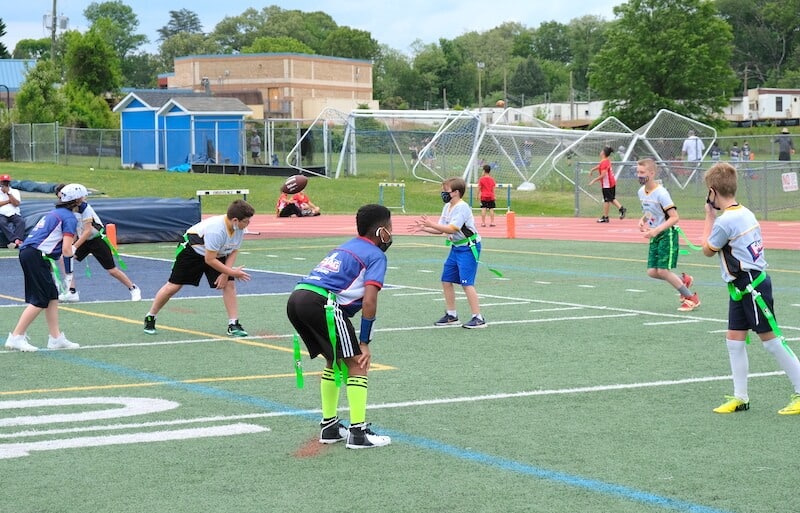 The offside penalty in flag football is a minor type of foul that occurs when a defensive player is across the imaginary line of scrimmage into the offensive team’s area at the time the ball is snapped. If this type of foul occurs, the advancing team will receive a five-yard penalty.

A typical offside foul is caused by over-eagerness on the part of the defender; this can be especially tough for younger kids. Let’s take a look at this foul and the penalties from it in more depth.

More Background on the Offside Penalty

The job of a team’s defense is to stop the advance of the team with the ball. In the world of flag football, the defense must prevent the opposing offense from gaining yards, or at least, minimizing the yards they offense gains. Sometimes, the eagerness of the defenders to make the play can lead to the committing of fouls.

An offside penalty in tackle or flag football occurs when a defensive player crosses the line of scrimmage before the snap the ball, and is still there when the ball is snapped. This type of foul typically has the following penalty: five yard penalty against the defending team and the offense repeats the down.

Some flag football leagues may use the term “neutral zone infraction” instead of “offside”, but these are in actuality the same foul with the same penalty.

Some Interesting Aspects of the Offside Foul in Tackle Football

Understanding the Line of Scrimmage to Better Understand Offside Fouls

The scrimmage line or line of scrimmage is an imaginary line that crosses the field of play from sideline to sideline. No team may cross this line until the play begins. Here are some key points to understand about the line of scrimmage:

Does the Committing of an Offside Foul Always Stop the Play?

When a defender is offside, the referee may or may not allow the play to continue. If the referee deems that the defender is caught just across the line of scrimmage but is not in a position that gives the defense and unfair advantage, the referee will likely not blow the whistle and stop the play, but will instead allow the play to continue and then announce the foul at the end of the play. In this situation, the offensive team can elect to take the result of the play, or accept the penalty against the defense. If the defensive player is far across the line, in such a way that the referee feels like the defense has an advantage, then the referee will likely blow the whistle and stop the play, enforcing the penalty at that point.

What Is a False Start, and How Does It Differ From Offside?

What Is the Primary Difference Between a False Start Foul and an Offside Foul?

Now that we know what the offside and false start fouls are, let’s look at the difference between both infractions. Some people use both terms interchangeably to refer to the same type of foul which contributes to the confusion. The key differences between false start and offside is:

A Final Thought on the Offside Foul in Flag Football

Offside is one of the most common minor fouls in flag football. It is one that coaches need to work on with their young players to help them learn where to line up, and to stay still until the ball is snapped. It can be demoralizing to your team to allow a silly mistake to give the other team an advantage or help them move down the field.

link to Is Blocking Or Screening Allowed In Flag Football?

Continue Reading
link to What is a Fumble in Flag Football? Let's Look at the Rules

If you are new to flag football, and you are used to watching tackle football on TV, you are probably wondering about some of the rule differences. One question that often comes up is, can a player...