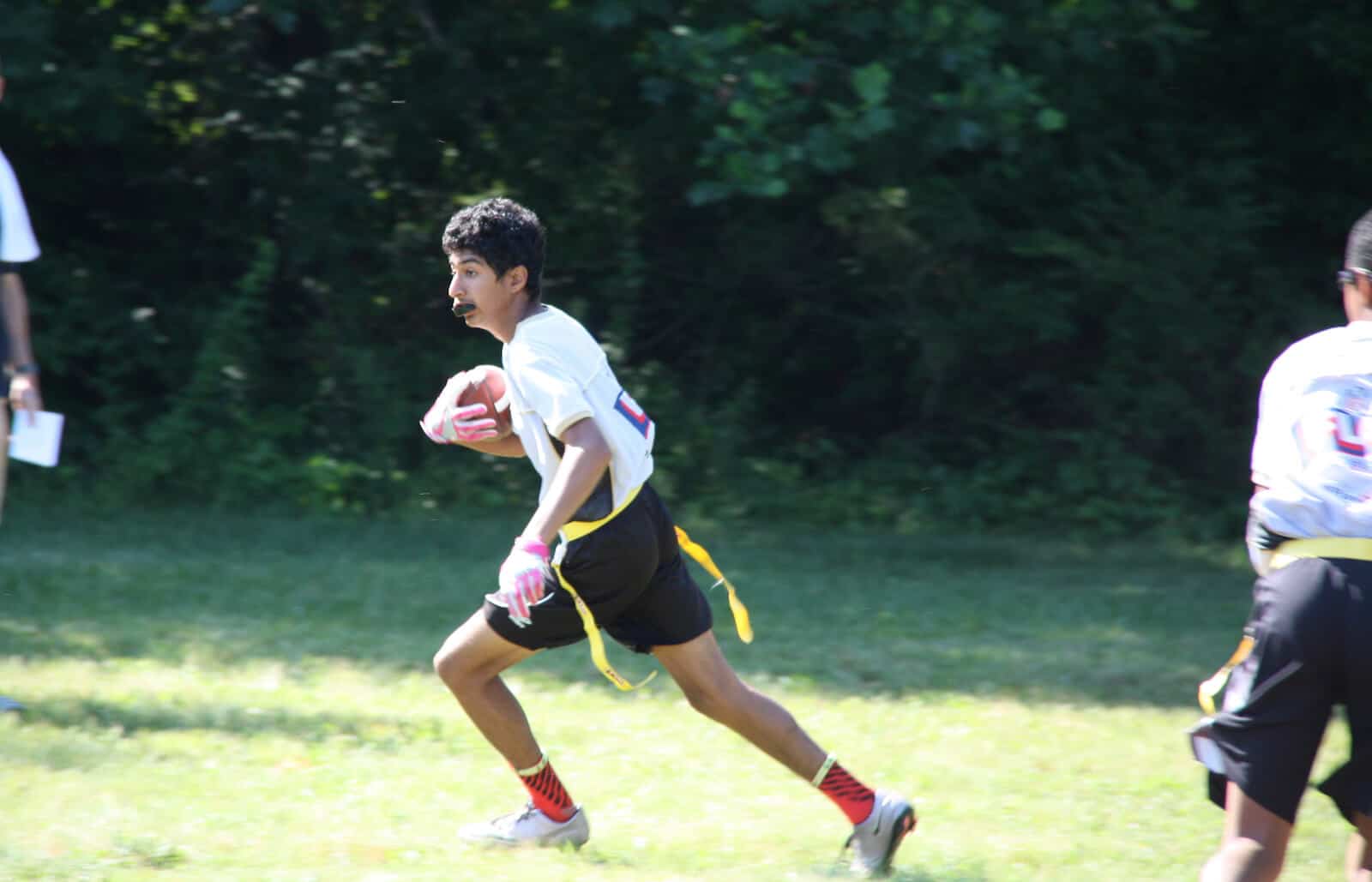 If you are new to flag football, and you are used to watching tackle football on TV, you are probably wondering about some of the rule differences. One question that often comes up is, can a player fumble the ball in flag football? I’ve heard this question asked frequently by new flag football coaches over the years. The answer is straightforward but has some interesting caveats.

In flag football, when a player drops (or “fumbles”) the ball and it hits the ground, it is considered a dead ball. This means that the down is over and the ball is spotted where the ball hit the ground, and the offense either moves on to the next down, or it is a turnover on downs if it was 4th down.

I have never encountered a flag football league where a fumble resulted in a “live ball” in which players could jump on the ball to try to keep or take possession. However, there is still some misunderstanding about whether or not fumbles are actually possible in flag football. Read on for more details, and some interesting possible caveats …

Fumbles are possible in flag football, but the results are very different than tackle football

I’ve seen several league rule books (and even the official NFL Flag Football rules) state: “There are no fumbles in flag football”. But then those same rule books say in the very next sentence that the ball is dead and the spot where the player with the ball fumbled it. How can a player fumble the ball if there are no fumbles? To answer that question, we first must define exactly what a fumble is.

So, by this definition, there ARE fumbles in flag football. It is just that the results of a fumble in flag football are different from what happens in tackle football. When those rule books say there are “no fumbles” in flag football, those are just badly written statements. What they meant to say is that if a player fumbles the ball, it is a dead ball where it hits the ground. Flag football players do not wear helmets or pads, so it would be a big safety risk if players were allowed to try to recover fumbles. So, whether or not the offensive player had possession of the ball if the ball hits the ground, it is dead at that spot.

Of course, you must consult the rules for your flag football league to ensure you understand their rules around fumbles, but by far this is the most common way it is handled.

What does it mean for a player to have possession?

Flag football rule books usually do not have a lot of detail about defining possession, leaving it up to the referee’s judgment. Usually, it just means the player has control of the ball. When it comes to fumbles though, whether or not the player had possession usually doesn’t matter. In other words, imagine this scenario. The quarterback takes the snap from the center and turns to hand the ball to the running back. During the handoff, the running back bobbles the ball, and it falls to the ground. It really does not matter if the running back ever had possession of the ball or not … either way, the offense fumbled the ball, and it is a dead ball right there, and a loss of down.

No matter how it happens, usually, if the ball hits the ground in flag football, it is a dead ball. However, I have seen one youth flag football league where there was one exception. In the case of this league, if the center snaps the ball to the quarterback, and the ball is fumbled on the snap AND the quarterback can safely recover the ball, the ball is not whistled dead and play can continue. In that league, the quarterback could pick up the fumbled snap and continue the play. It is up to the discretion of the referee if a collision is going to happen and they can whistle the play dead that that point. This unusual, but you should definitely check with your flag football league to find out the rule in your situation.