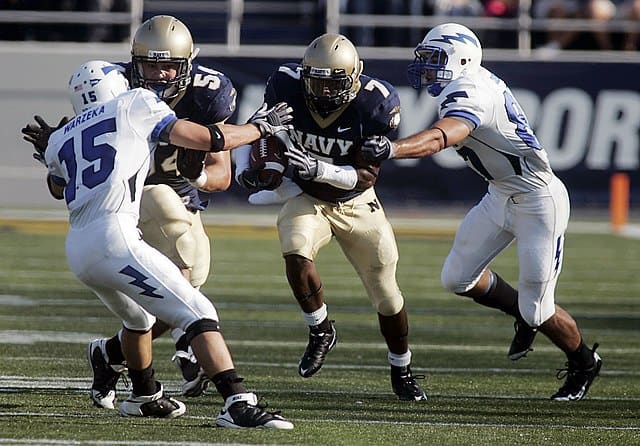 It is undeniable that American Football is one of the most popular sports on the planet. While quite a few people have played tackle football in their youth, many have only ever watched it on television. One thing that is extremely common in tackle football that we watch on TV is blocking. This naturally may lead those who are unfamiliar with tackle football’s close cousin, flag football, to wonder: is blocking or screening allowed in flag football?

As a general rule, blocking and screening are not allowed in flag football, as it is a non-contact sport. Although accidental physical contact can occur, the players must try to avoid violent contact, not only for safety but also to avoid penalties. However, non-contact screening is an acceptable alternative, in some leagues.

Flag football is a fun sport and is considered to be “non-contact”. The risk of injury due to violent contact between players is lower than in tackle football. Thanks to this, flag football has become an ideal activity for children and adults, regardless of gender. It is a game where the development of strategies and tactics replaces physical contact. The players of a team must fight to pull the opponent’s flags without knocking anyone down. Let’s take a closer look at blocking and screening in flag football, and how it relates to this concept of “no contact”.

In contrast to tackle football, where the ball carrier is stopped by bringing them to the ground, in flag football defenders try to pull the ball carrier’s flag from their belt without making physical contact. When they accomplish this flag pull, it is the equivalent of a down in tackle football; the referee stops the game, and a new down begins from that spot.

The Origin Of Flag Football

Between the late 1930s and early 1940s, American soldiers were preparing for combat in World War II. It was at this time that flag football emerged as a recreational activity for soldiers.

The main reason for playing flag football was that tackle football could cause severe injuries and decrease the available personnel they could send to war. Playing flag football allowed them to have fun in a safer environment.
Today, flag football is one sport that allows greater integration between boys and girls. We can find female and male leagues and even mixed leagues where people of either gender participate on the same team.

Because of the low-contact nature of flag football, it is growing in popularity. The number of boys and girls between the ages of 6 and 12 that play the sport in the United States has been growing at 38% for the last several years. In contrast, participation in tackle football has been declining in many parts of the United States.

What are the Essential Rules You Should Know for Flag Football?

If you do not know much about this sport, it will be helpful for you to know some essential points about flag football:

Blocking in Tackle and Flag Football

In tackle football, it is common to see an offensive player using their hands to push back a defensive player, or otherwise impeding the defender from getting to the ball carrier. However, this is almost never allowed in any flag football league.

However, there is one way to do a form of screening. This involves an offensive player standing still in a way that might impede the path a defensive player would take. The only way to do this is without contact. In this case, the player blocking must place his hands behind his back. Suppose he uses his hands, arms, elbows, legs, or body to cause contact when screening. In that case, the play is illegal and will be invalidated. This is similar to setting a screen in basketball. In some flag football leagues, even this is not allowed, so be sure to consult your league rule book.

What Can’t The Screening Player Do?

Since flag football is a non-contact sport, the offense must perform the tactic of non-contact screening flawlessly. Otherwise, the player exposes himself to a personal foul and the team to a penalty. Here’s what a player cannot do when screening:

As I discussed above, setting some form of basic, non-moving screen may be allowed in some flag football leagues, while others may not allow it. In either case, the reality is that offensive players running downfield on a passing route can often impede the progress of a defensive player. As a coach, try to have your players work on avoiding colliding with defenders while they are running their routes. Ultimately, it often comes down to a judgment call by the official as to whether or not an offensive player intentionally blocked a defender.

While your kids are going to love offense, you as the coach need to always preach that it is defense that wins championships. Fairly quickly you are going to feel like you need to focus almost all...