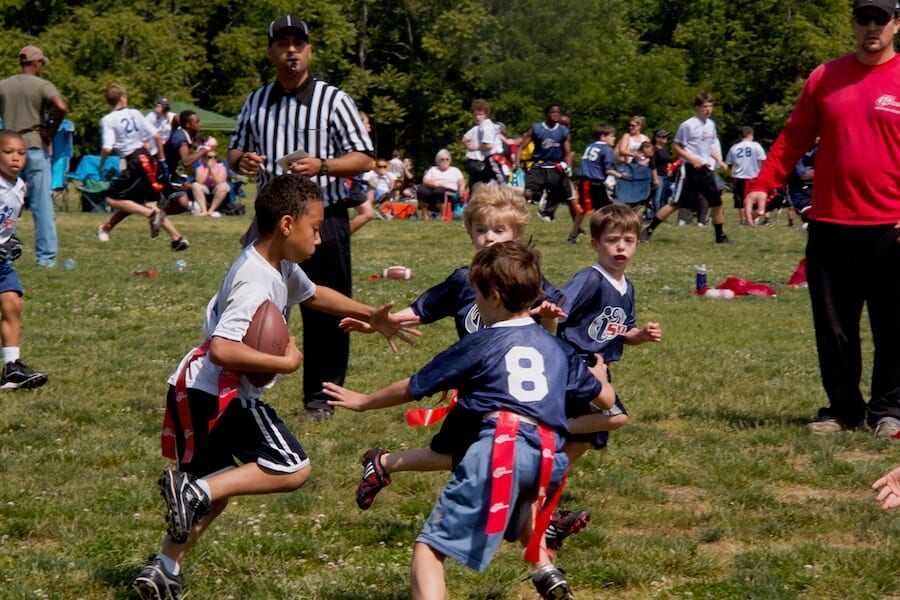 While your kids are going to love offense, you as the coach need to always preach that it is defense that wins championships. Fairly quickly you are going to feel like you need to focus almost all your practice time on offense.  Early in the season, particularly with kids you’ve never coached before, the offense is going to seem so much more complicated to them. You will be tempted to focus all your practice time on those fancy offensive plays. You will need to resist that urge, because ignoring practicing defense is the exact opposite of what you should be doing. Instead, pick one or two offensive plays to master, and then spend A LOT of time focusing on defense. Putting a heavy emphasis on defense will pay huge dividends for your team. We always told our kids: “If they can’t score, they can’t win!” We would even use this as a pre-game pump up chant:

There are two basic skills that kids need to master if you are going to have success as a team: pulling flags and catching balls. At first glance you might think “sure, that makes sense. One is about offense and one is about defense.” Wrong! Pulling flags is certainly about defense, but so is catching balls. When the other team tries to throw a pass, it is the job of the defenders to go get that ball. In youth flag football, quarterbacks are going to try to pass on you, especially if they have a coach that doesn’t know that passing is a dangerous strategy. These kids aren’t NFL caliber quarterbacks. Their passes are likely to be short, or long, or slow-arcing ducks. The opportunities for interceptions will be there many times in each game, unless your kids are just completely out of position. And if they are in positon, they have to take advantage of those opportunities. There is nothing so crushing to a team’s spirit as throwing an interception. You take the ball away from their offense, taking away one of their few chances to put points on the board, and put it right back in your hands, often with good field position. You may even score a quick six points on the interception. So in your drills practice pulling flags and catching balls more than anything else.

When it comes to pulling flags, one tendency that you will see in your kids is they will try to side-step an oncoming ball-carrier. Then they will try to reach out and pull their flag from the side as the runner flies by. I describe this as a matador holding out his cape and side-stepping the oncoming bull. This is really poor technique, and trust me, you will probably never fully get them out of it. I had kids play for me every spring and fall for 5 years, and they still did it sometimes.

Here are the elements of proper flag pulling that you need to drill into their heads:

In addition to each one of them learning the fundamentals at the individual level, you should preach and practice the concept of help defense. This is all about what happens when the play gets going and the ball carrier is coming toward one of your players. Once the ball carrier has crossed the line of scrimmage, the rest of the team can’t just stand there and watch as one teammate tries to pull the flag. Instead, everyone should be swarming to the ball as fast as they can. This does two things. First, you take away maneuvering room for the ball carrier, which makes it much easier to pull their flag and limits their yard gained. Second, if the first defender misses the flag pull, there are others there to help. Notice that I said everyone should swarm to the ball once the ball carrier has crossed the line of scrimmage. Before that, there is always the possibility of a pass, so your kids will have to learn when to continue to cover their man or zone, and when to swarm to the ball.

When they do come in to swarm the ball, practice having them box the ball carrier in. The closest one needs to square up right in front of the ball carrier, but as others come in they should create a “box” around the ball carrier to take away their ability to maneuver and break away. Note that the sideline is a extra defender when the play is on near it.

Focus on these basics, and you will start creating a smothering, disruptive defense!