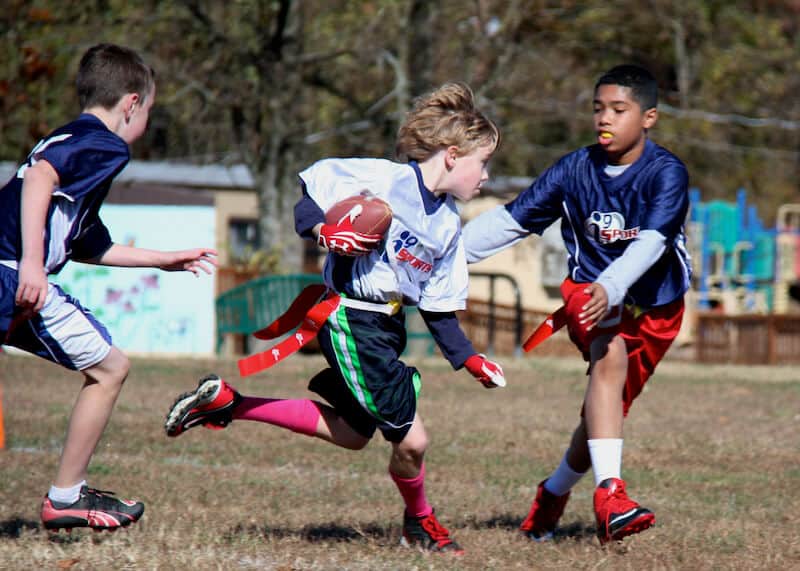 There are a lot of choices when it comes to picking a sport or activity for your child to participate in. Flag football has grown enormously in popularity in the last 20 years. But how easy will it be for a beginner to learn the sport?

Flag football is one of the easiest sports to learn quickly. Compared to other sports such as baseball, soccer, basketball, or even tackle football, flag football offers kids a way to quickly contribute as a key member of a team. In no time, they will be catching passes and scoring touchdowns.

Let’s run down a few of the reasons why flag football is such a beginner friendly sport.

Many sports are quite difficult to be able to play at even the most basic level, especially if you are very young. Just think about basketball … if you have a young child, say 6 or 7 years old, and they want to learn to play basketball, imagine how difficult it is to get a basic level of competency with the concept of dribbling. Dribbling a ball is a critical skill to learn, because otherwise, you can’t even move with the ball on the court. But have you ever watched 6 year-olds try to dribble a basketball for the first time? It is surprisingly hard for them to learn. Not to mention, they also have to try to learn how to shoot the ball through the hoop.

Other sports are similarly difficult to learn for young beginners. Baseball requires enough hand-eye coordination to hit a ball with a bat. Soccer requires being able to dribble a ball around a field using only your feet. Tackle football has a lot of rules, and specific jobs and rules for specific positions.

It’s not that young kids can’t master these skills. We’ve all seen kids who are great at such sports. It is just that for the beginner, they have a pretty steep learning curve.

Flag football, on the other hand, really only requires knowing how to run, and how to carry a football. With those two skills, your child can score a touchdown in their very first game. Talk about exciting!

Of course, there are more skills than this required to become an expert flag football player. Throwing a football is one area where it does take some experience and skill to do it well. Even catching a football requires some practice. But for just learning the very basics of taking a hand off and running with the football, or pulling a flag, kids can pick that up in about 10 minutes.

Flag football is pretty easy to jump into because you don’t need much equipment. The coach will be able to supply the jersey and flag belt. All you need to bring is a mouth-guard. You don’t even need cleats, although they are highly recommended.

Compared to most other sports, flag football is pretty straightforward. It is basically a very pared down version of tackle football that you can watch on tv. There is no punting or kicking extra points, no blocking (usually), no tackling. Instead of getting a first down every 10 yards, there is typically only one line that allows you to get a first down (mid field). And there aren’t that many possible penalties.

It does help if the player is already familiar from watching football games on TV, and has a basic understanding of the rules. But even if they have never played or watched football before, I found that I could explain the basic rules to a new player in about 10 minutes.

Some sports, like baseball or tackle football, or even soccer, have quite a few different positions on the team. These positions can be very different if you are on offense, versus defense. And they often have specific rules that bind what that player in that position can or can’t do.

Think about regular tackle football. There are some pretty complicated rules about who is an eligible receiver of a pass after a snap. These rules are based on the player’s position at the time of the snap. So if a new player is playing on the offensive line, in pretty much all cases, they cannot receive a pass beyond the line of scrimmage.

In flag football, there are usually only 5 or 6 players on the field, and really, there aren’t many distinctions like that among the positions. In most leagues, you have the center (who snaps the ball to the quarterback), the quarterback, and then everyone else is a receiver or running back. But they are all eligible to receive a pass (except for the quarterback, who has to be the one throwing the ball). Much simpler to understand!

One of the reasons flag football is so easy for beginners to pick up is that it is extremely similar to what kids would do themselves in a game of backyard football. This makes it an ideal sport for beginners. So if your child shows any interest at all, find a good league and have them try it out. They will probably love it!