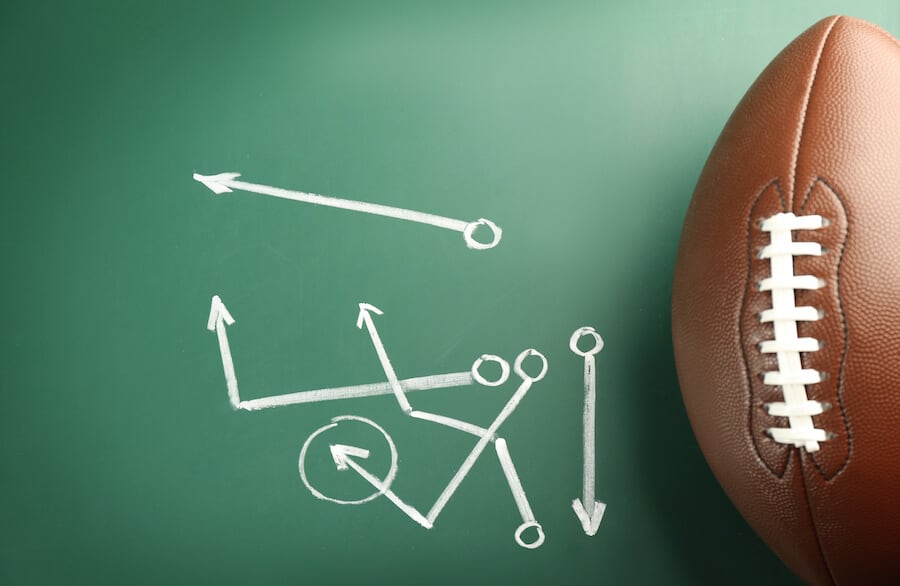 As a new flag football coach oh so many seasons ago, I was excited to get a chance to help my team go out and taste victory. But I quickly felt that excitement dissipate as I sat down to try to plan out our offense. I came up with several plays, but the more I thought about the offense we would run, I started to think about teaching these plays to these 3rd graders, and I wondered how I could get them to master the intricacies of each play. Which led me to wonder, how many plays should I have in the playbook? After several seasons under my belt, I learned through first-hand, and sometimes painful, experiences. Let’s look at the breakdown of how many plays you should use in your playbook.

As a general rule, you should have no more than 12 plays in your playbook. With an inexperienced or very young team, you should probably have no more than 6 plays. Your offense will find success not because of the number of plays you try to run, it is how well your team can execute a few well-designed plays that are tailored to work with your team’s skillsets.

As with any rule, there are some variations to this guideline that you need to keep in mind. You may need to vary the number of plays based on the ages of your players, their experience level, and their athletic ability. Let’s look at some of these factors that go into the number of plays you should use, but keep the general principle in mind … simpler is better.

I’ve seen it happen many times. A flag football team led by an inexperienced dad who has looked up about 25 plays on some website, and has built them all into his offense. The result? The kids are confused, because they haven’t had enough time to practice each play, so they execute them all poorly. The coach gets frustrated because he feels like either his plays aren’t working, or the kids just don’t know how to execute them. And none of them, not the kids, not the coach, not the parents, are having any fun.

Trust me, it is not a winning strategy to have dozens of plays that you are trying to get your team to learn. Especially at the younger age levels, or with less experienced players. Your success on offense is all about how well your kids can execute each play. Each play should be designed to accomplish a few different things, such as finding the weak spots in a zone defense, or getting your best player open in space, or creating confusion amongst the defense. But your team won’t be able to accomplish those goals if they can’t execute the play well.

I have a few plays in my playbook that are almost unstoppable if they are executed correctly. And my kids work on them so much, with plenty of guidance and encouragement from me, that they know how to execute them correctly. We would play teams multiple times in a season, and pretty soon, they could tell exactly what we were going to do when we ran those plays. I would hear the defense yelling it out to each other before we snapped. But it just didn’t matter … they rarely stopped us.

Execution is the key, not a having a huge number of plays. Especially with younger teams.

Use fewer plays and master those

After coaching the same group of kids for many seasons, and watching them grow and mature, becoming very capable athletes, I had an opportunity to help coach a much younger team of 3rd graders. I had almost forgotten how much slower and smaller they are than 8th graders! At first, I thought we would use the exact same playbook of 12 plays that we used with the older boys, but I quickly realized that was NOT going to work. So, I simplified the playbook. I whittled my 12 plays down to 7, and at the beginning of the season, we only practiced 3 plays. We went into the first game of the season only being able to run 3 plays.

But, it worked. Even though we only had a few practices before the first game, the boys quickly went from confusion to confidence as they learned those 3 plays cold. That first game, we killed the other team, because they looked lost and unprepared, while our boys knew exactly what to do.

Now, the reality is, most of my flag football plays aren’t really just one play. For example, many of the plays I use are run-pass option plays, where the quarterback can either hand off the ball or fake the handoff and drop back to pass. With the older, more experienced kids, I often let the quarterback decide at the point of the hand-off whether he wants to fake it or hand it off. But with the younger kids, I tell them exactly which way to do it in the huddle. So, in reality, our 3 plays could actually be considered 6, since each one could either be a handoff or a pass. But in either case, the kids only have to learn one route, so you get two plays for the price of learning one.

As that 3rd-grade team went along in that season, we would add one new play each week. That way, they got to expand the number of plays they could run slowly. The newer plays we might only run once or twice a game, relying mostly on the plays they knew better. But by the end of the season, when the playoffs came along, we had 7 plays that they could execute very very well. That team won the championship, in their first season playing flag football together.

Once you have a team of older veterans, you can start adding interesting variations to plays

If you play in a league that does not do a draft and lets you bring whatever players you want, then you will likely end up with a solid core group of kids that keep coming back to play with you each season. As those kids grow in experience, maturity, and athleticism, you can expand the number of plays in the playbook. While you should still aim for around 12 plays total, you can start to add some variations to the plays to increase the number of options the team has for each play.

For example, once my teams get comfortable with a play, I will introduce the concept of running that same play “inverse”. Here is an example. This is one of our standard offensive plays. Here you can see how we run it “normal”. This is the version the kids learn first. In the second image, you see the same play inverted. This is a different look you present to the defense, and you attack a different side of the field, so in effect, this one single play becomes two different plays in this way.

A handy matrix for determining how many plays for your offense

Use the table below as a guide for your team, based on their grade level and experience level. For example, if your flag football team are 4th graders, and they have already played together for 1 or 2 seasons, and are already familiar with some of your plays, you can consider them Intermediate level. At that level, you should probably focus on 7 plays that they can execute really well. Feel free to tweak this to your team … if they are pretty sharp kids, you could go up by one or two plays above the number I recommend here.