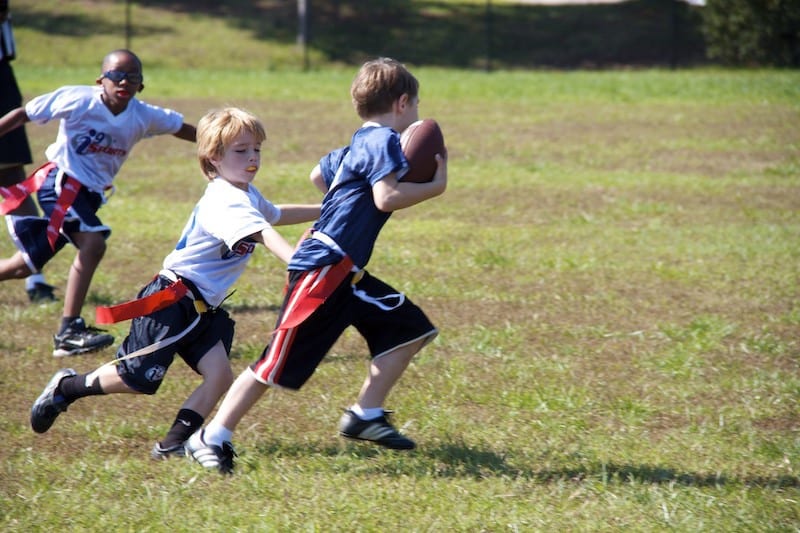 Early in my coaching experience, I made the mistake of having the kids run simple drills. For example, having two kids pass the ball back and forth to each other. This is not terrible, but a far more efficient use of the time is to do what I call compound drills. These are drills where you combine multiple skills for multiple kids, in situations that are as close as you can come to game time situations. Not only are such drills more effective at preparing the kids for the situations they will face in games, but they are a lot more fun than simple, single-purpose drills.

One example: Handoff, running, and flag-pulling

A good example of this is one that I call “handoff, running, and flag-pulling” (I know, not a super catchy name). In this drill, you will have one group of kids line up in single file line, looking down the practice field from one “end zone” toward the other. Have one QB line up about 3 yards in front of the first kid in the line. Then, about 7 yards in front of the QB, have three kids lined up in a line, spread out, across the field. These three kids are defenders. One should be in the middle of the field, with the other two on either side, halfway toward the cone sidelines. The set up should look like this:

This drill accomplishes multiple goals. Of course, it will help your team get better at defense. But it is also great for practicing hand offs. And, it gives kids a chance to learn to be more elusive. Not to mention, it’s fun.

Quarterback and running back

The QB and the running back need to execute a clean handoff. Watch YouTube videos so you know how to explain the proper technique. It is extremely important to get this right, as a botched handoff will mean a dropped ball, which means a loss of a down. The running back needs to learn how to position their arms (inside arm up, outside arm down, big “pocket” to receive the ball). The running back’s eyes need to be up and looking down field at the defenders, not looking down at the handoff.

Both hands should smoothly clamp down on the ball as the QB places it in the pocket. The runner should keep both hands on the ball securely as they run through or around the defenders, to prevent flag guarding. Look for a hole in the defense and explode through it, or start running toward an interior hole, then juke to the outside, and try to turn up the sideline. The QB needs to turn and extend the ball toward the RB, placing the ball right in the pocket, but not “slamming” it against the RB’s stomach. The QB needs to learn to get the feel of when to pull his or her hands off the ball — too early or too late and the ball will very likely drop to the ground.

Stay ready, in a balanced, athletic stance. Be patient and wait to see which way the running back is coming before advancing. Once the RB has gotten the ball and has begun to advance, the three defenders should collapse on the RB, careful to not over pursue to one side or the other. This is a good chance to teach the kids on defense to use the sideline as an extra defender. If the running back runs out of bounds, it is as good as a flag pull. Teach them to watch the runner’s hips, not his eyes or his head, or they will get easily faked out.

Finally, good flag pulling technique is critical. Hands need to firmly grasp the flag, without grabbing clothing, and pull strongly. Teach them to keep square up in front of the runner. They should not turn to the side to try to grab the flag as the runner goes by. I call this “bull fighting”, when a matador holds out their cape to the side as the bull charges. It is really difficult to grab the flag of a player who is running past you at full speed. Far easier is to grab the flag of a player who has stopped or hesitated right in front of you. It is hard to convince them to stand their ground when a kid is running right at them, but it is important to learning proper flag pulling technique. Finally, all three defenders should swarm to the ball. This way, if the first flag puller misses the pull, other teammates are there to assist.