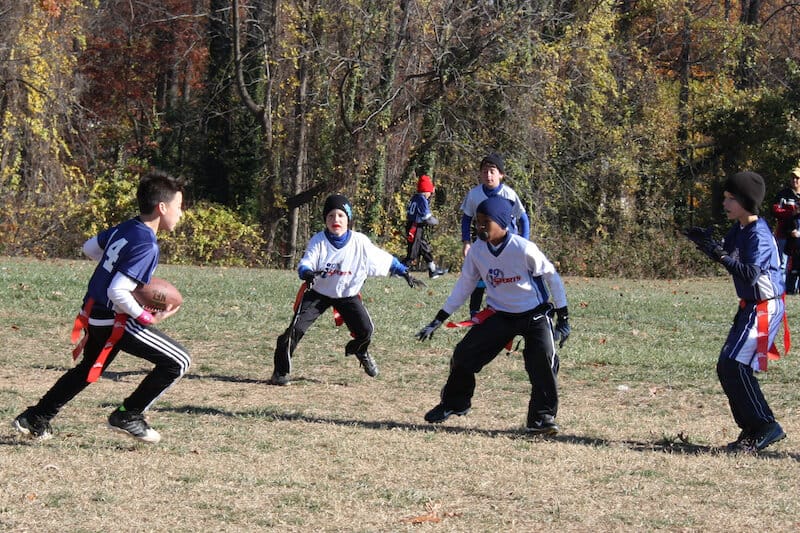 Whether you are a new flag football coach, or an experienced coach with a few seasons under your belt, you have probably wondered – what is the best type of defense to run? Should you primarily use zone or man-to-man defense?

As a general rule, a zone defense is the best type to use in youth flag football. Many coaches try man-to-man and fail, because there are so many ways to beat a man defense. In certain situations, you may want to deviate from this, using either man-to-man or a zone +1 type coverage, but your primary base defense should be a zone defense.

Let’s dive into these concepts in more detail to see why.

What is man-to-man defense?

If you are unfamiliar with the concept of man-to-man defense, it is similar to other sports, such as basketball. In man-to-man defense, each defender guards exactly one offensive player, mirroring them before the snap, and then attempting to guard them anywhere they go on the field after the snap. In other words, each defender needs to identify their “man” on offense, before the snap. Their man is the offensive player they will guard. They will then line up opposite their man before the snap, and then after the snap, they will go with their man, whether they run a receiving route or take the ball on a handoff.

In case you were wondering, “man” in this case is just a generic term for “person”. It does not matter if you have a co-ed team of girls and boys, the term still works.

What is zone defense?

In a zone defense, each defender is assigned an area of the field, known as a “zone”, and it is their responsibility to guard that entire zone. Thus, in a zone defense, the defenders line up to guard their zone, irrespective of how the offense lines up to start.

The diagram below shows this as an example. Here the defenders, marked with X’s, are in a 2-3 zone (two defenders up front, 3 about 10 yards back). Each defender has a zone of responsibility, shown as the green area around their position. The offense is lined up in an off-balance formation known as “trips”, because there are three offensive players on one side of the line of scrimmage. As you can see, the defenders do not try to shift over to the left side of the field to cover the extra offensive players on that side. No matter how the offense lines up, they will try to cover their zone.

Why is zone defense more effective than man-to-man?

There are a couple of big problems with man-to-man defense. If the defender is shorter or slower than their man, this is a mismatch that the offense can take advantage of. Good coaches will spot these mismatches quickly and have the quarterback start targeting that player. Secondly, if the offensive player crosses across the field, through the “traffic” of the play, it may be difficult for the defender to keep up with them, creating an open receiver. Finally, a man-to-man defense can eliminate opportunities for “help” defense, as each defender is pre-occupied with guarding their man and may not be aware that a pass has happened to an open offensive player until it is too late.

That’s not to say that the zone defense is perfect, or that there are not ways for an offense to exploit a zone defense. But you will find that your team will most likely grasp the concept of a zone defense much more quickly and be much more effective with it than trying to run man-to-man.

While we tried man-to-man at various points over our many seasons, we always returned to zone defense. In my opinion, unless your team is stacked with super-fast stud athletes, man-to-man is going to cause your defense to get burned quite often. When I saw teams try to line up man-to-man against us, it made me salivate with anticipation, because I knew exactly how to beat them. I had plays that I would specifically run against man-to-man defenses, because I knew that we could get one of our fast athletes open against the defense.

When should you use something other than zone defense?

One variation that we often used of our standard zone defense was in situations where the opposing team had one really fast, athletic kid. Often teams will lean on that one player to score most of their points … you will know it when you see it. It is the one kid on the team that can outrun, out jump, and out juke everybody. A team with a kid like that will find ways to get them into the open spaces of a zone defense, and this can cause you all kinds of problems.

In situations like that, we implemented what we called a zone +1 (or sometimes we called it a zone with shadow). What I would do is keep most of our players in our standard zone but take the one player from the defense who would otherwise be our quarterback blitzer, and instead of rushing the quarterback, I would have them cover the fast kid from the other team. In this situation, your fastest, most athletic player “shadows” the fastest, most athletic player on the other team. The rest of your team is playing zone, but this one “shadow” player is playing man-to-man, covering that one really fast kid from the other team.

But in general, stick to zone, and have your kids learn the zone defensive system as well as they can. Practice it often, and before you know it, you’ll be stifling the offense of the other team.